Thailand offers variety of entertainment as well as beautiful worth-visiting temples and shops. The mouth-watering street foods are hard to resist. From barbeques to fresh fruits in affordable prices, it was awesome! Hands down to the locals who are the most welcoming bunch of sweethearts that never fail to fill you in with what’s there to discover. Although I would have to say my entire stay was terrific until my last day when I need to fly home and I missed my flight. But that’s another story for another time. For now, let’s have a quick flashback of the fun I was blessed to experience with strangers and on later days with friends (actually just one plus one).

I get to see few of their temples that are just so pretty! The sacredness of the place is so comforting and you feel this light-burden free-heart kind of feeling when you’re inside. Everyone is so quiet, I meant the whole place is peaceful because you’re not meant to make noises or whatever but to pray and pay respect. You’re not allowed to get in with your shoes on, it’s either you go in barefoot or with socks. There are also temples that you’re not allowed to take pictures of the inside. I’d like to point out as well the structures, it is mesmerizing judging the character, how talented people are who made them. I don’t know, it’s just amazing. All I wanted to say is, Buddhist Temples are designed to inspire inner and outer peace and definitely couldn’t agree more. 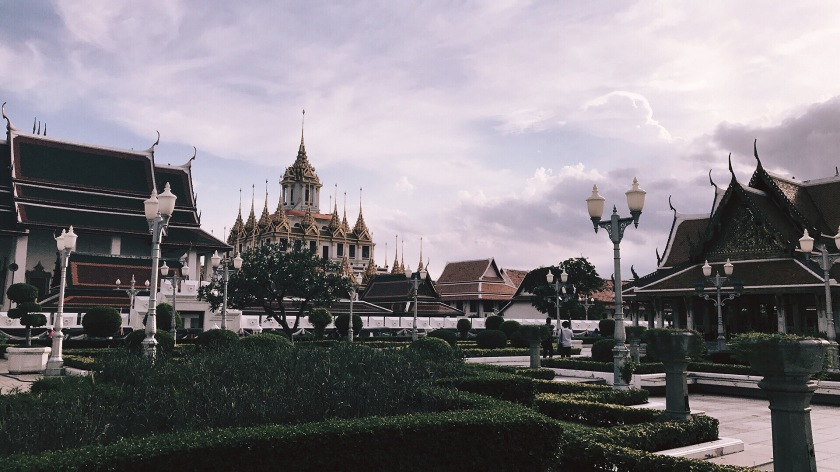 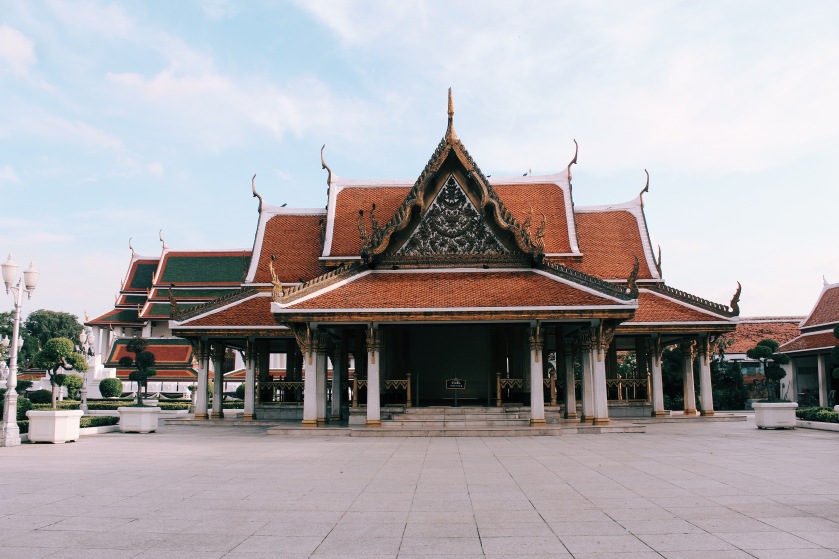 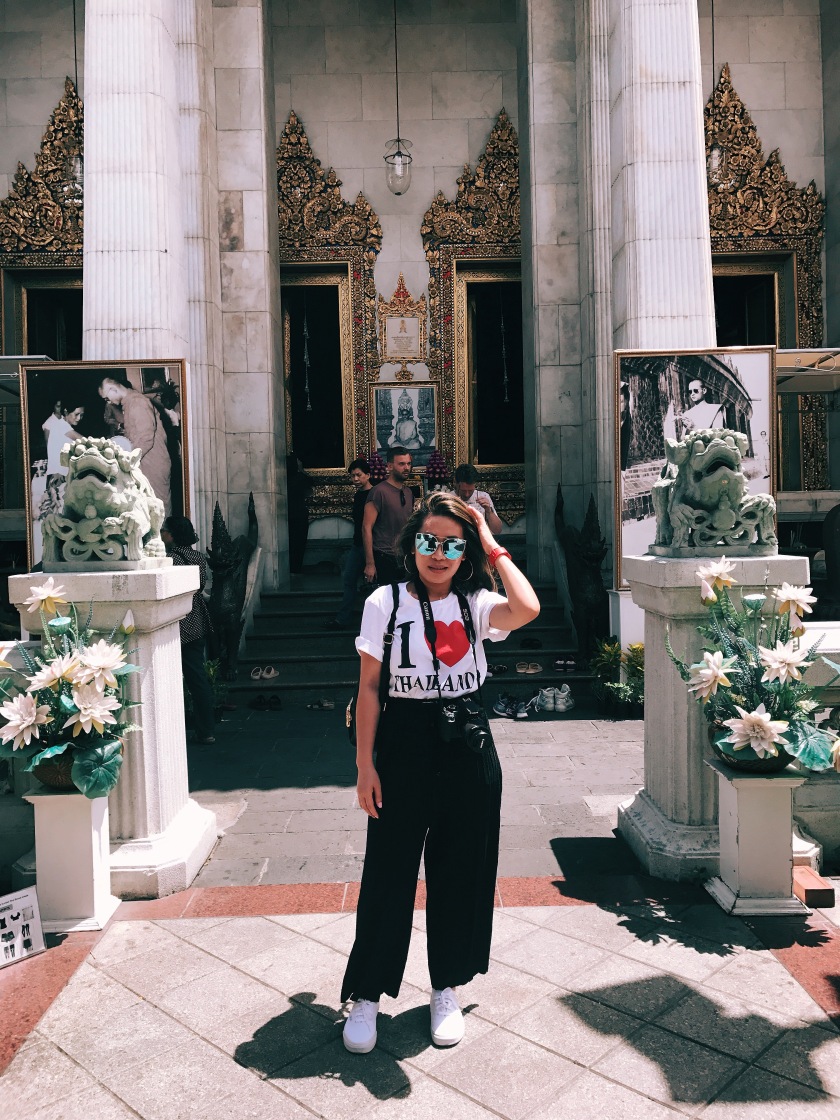 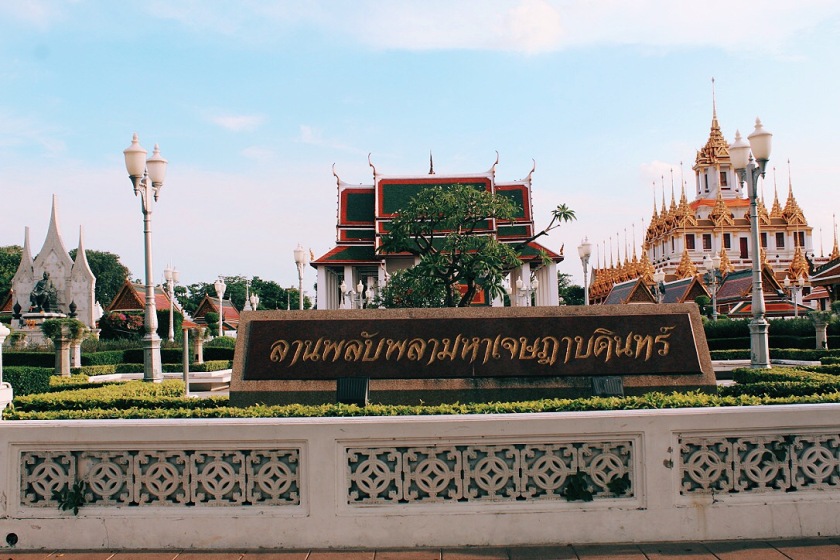 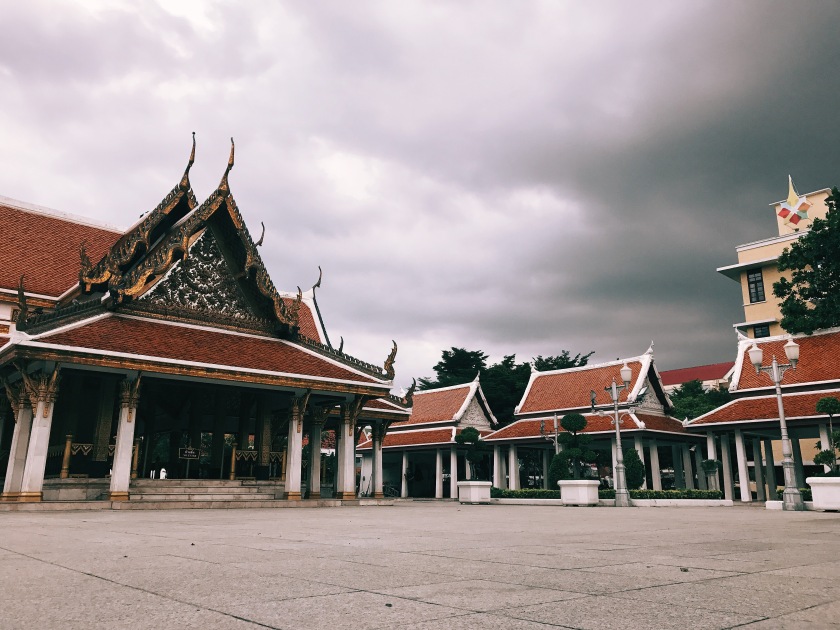 Let’s move on to FOODS. Foods on sticks (i made that up) are everywhere around the corner of every street (or probably not every single street haha). Little barbeque and fried sea foods have been my go to lunch plus FRESH fruits. If you’re vegetarian or not, you got them covered. I am such a sucker for anything coconut-y (literally everything that says coconut in it, I’m sold), and I mean it when I say the coconut ice cream there is worth all the fight for chances to have a taste of it! And I also had my fave soup ever, TOM YUM! 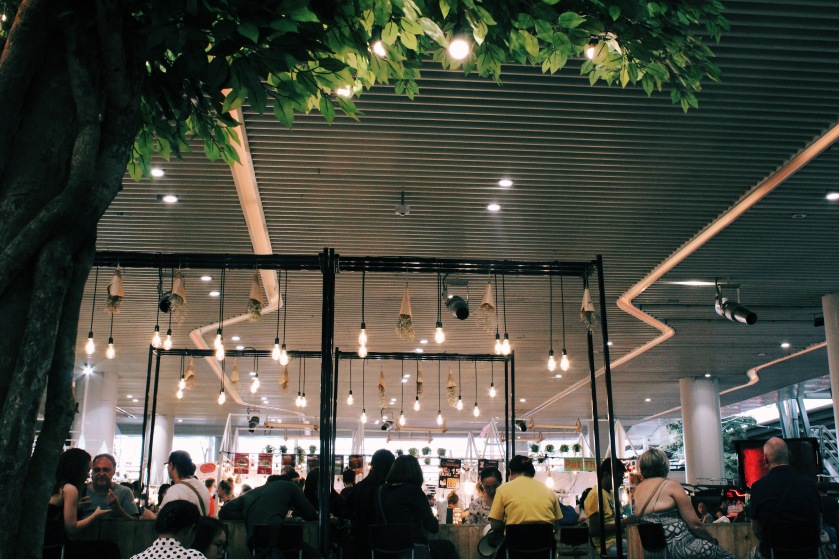 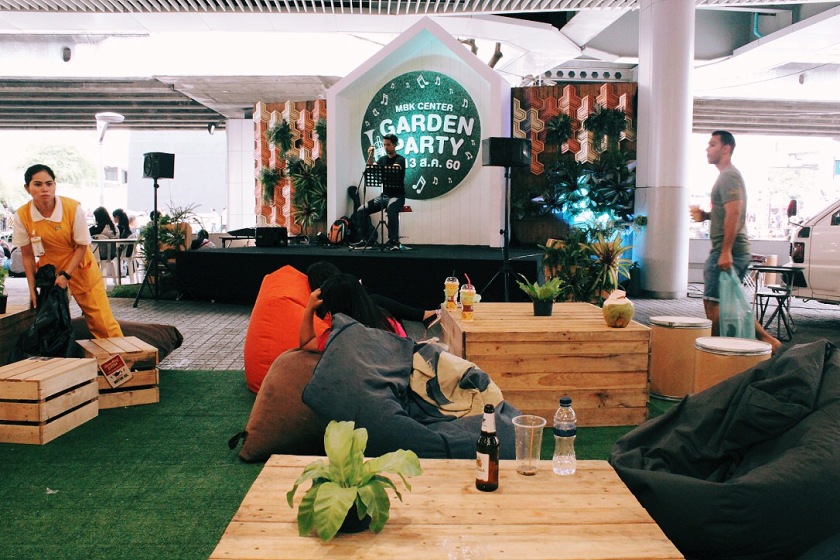 SHOPS. I really didn’t have the chance to go to every mall that was on the list of top places to go to, because it happened to be raining at that time I was supposed to go and ended up just staying and chilling in MBK Center for the entire half day. That wasn’t bad though, there was a Garden Party with a live band playing and I was surrounded by food stands and the kiosk of goodies where you can also shop. Later on that evening, I met with my friend and her boyfriend and we then grabbed a drink in Khaosan Road. In this particular street in Bangkok, you can find the long alley of bars, pubs, nightclubs whatever you wanna call it. There was loud music playing, ladies and gents having fun every corner doing them, tourists, vendors and shoppers oh and probably minors, on full force. 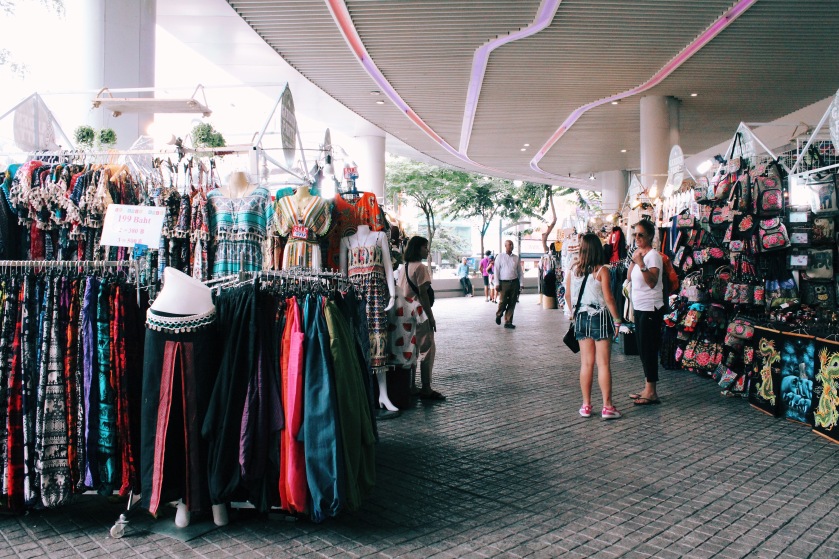 For the itinerary, I booked everything from flights to hotels on my own. I didn’t get packages for tours and whatnot. You can find the hotel I stayed in HERE and I can’t say much about the cost because surely it will change according to the currency exchange rate. For the pocket money, it will depend on how your expenditure is going to be. In my opinion, for 5 days your 1000 dirhams will get you everywhere if we’re talking about food and transport fares only. My tip, if you’re travelling alone or in a group choose a hotel that is accessible to the airport and tourist sites, it doesn’t have to be near but make sure you have an idea how to get in and out of the area because it’s easier that way. I flew with FLYDUBAI and landed in Bangkok, International Airport. From the airport, you don’t have to worry about transportation because they have a train that will get you to the city. My favourite part, AIRPORTS WITH TRAINS. 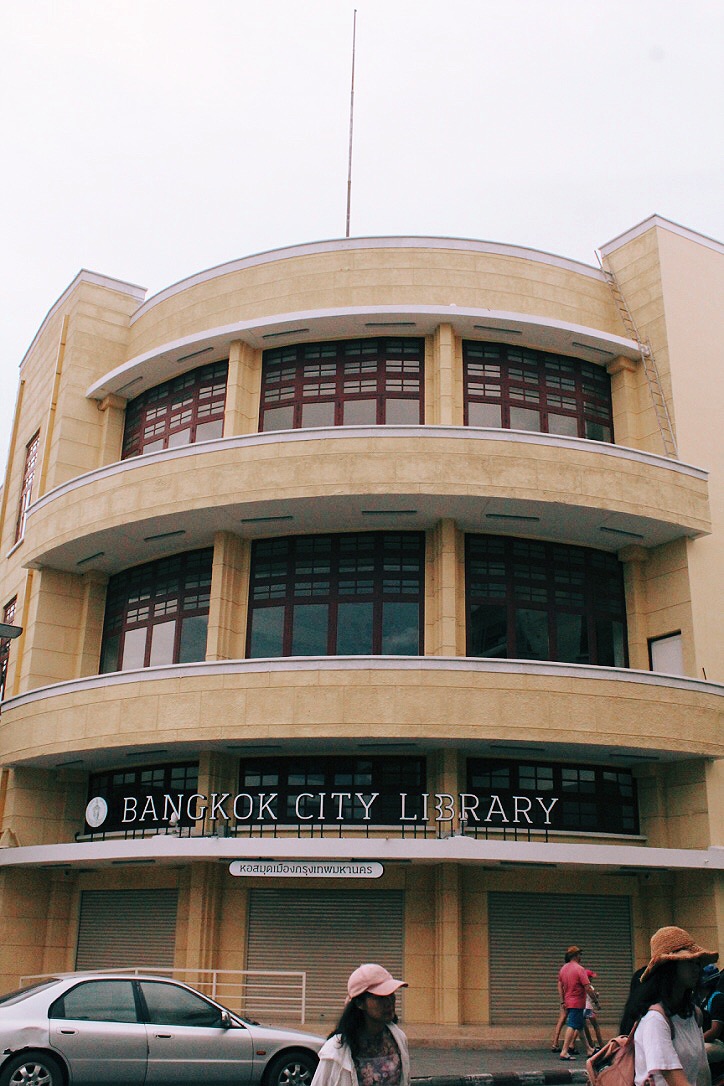 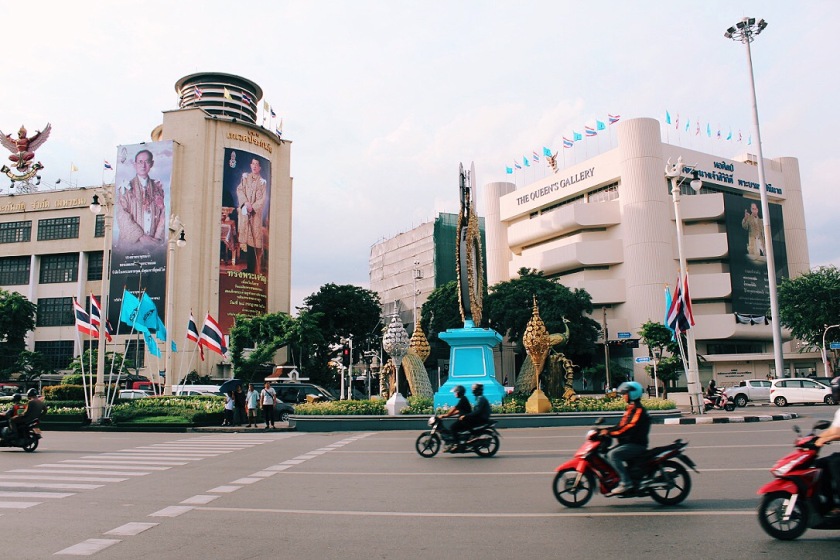 For those of you travelling to Bangkok soon, good luck and have fun! xx

Explorer of the unknown. View All Posts

happy nurses day lovelies !!! ❤️‍🩹❤️‍🩹❤️‍🩹
not much to tell
surprisingly, i socialized on most days of april.
happy earth day !!! 🌎
summer’s memory screen
what’s your idea of a good time?

SEARCH IN THIS BLOG